Do you nurture dreams about hiking 1000 kilometers? Or backpacking for a month or two? Here’s first of a series of posts on these subjects.

Here in Finland there has been rather a lot of discussion of long hikes lately. There have been several articles in Finnish outdoor magazines, and many blog posts about one to two month, or 600+ km backpacking expeditions.

My thought is that a day hike is a great thing. I love day hiking, either by myself, or most often nowadays with my family. Then again, I need to get to larger wilderness areas every now and then. A week (or, five to ten days, say) long hike gives much more than a day hike. You get totally immersed with nature, you encounter the hardships and glories of being all on your own and forget totally about everyday stress. In the same manner a month or two months long hike can give much more than a week long hike. An ultra-long hike can imprint memories that last for a lifetime. If all goes well. There are hazards, too.

The following links go to blog posts or articles written in Finnish, but I try to summarize them very shortly in English. 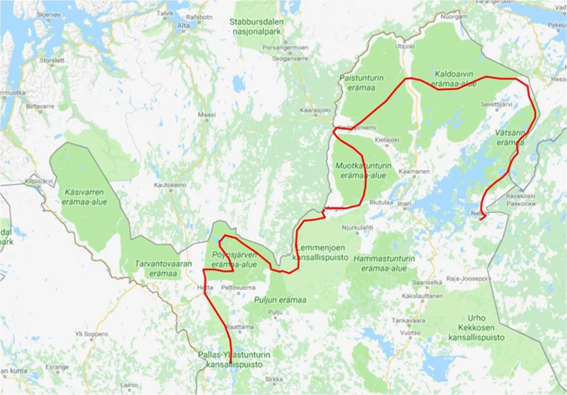 Three men, Jussi Virtanen, Juho Kotiaho and Lauri Ala, skied outside any ski tracks through Finnish Lapland from Nellim to Kilpisjärvi. Approximately 600 km in five weeks, in springwinter 2018. 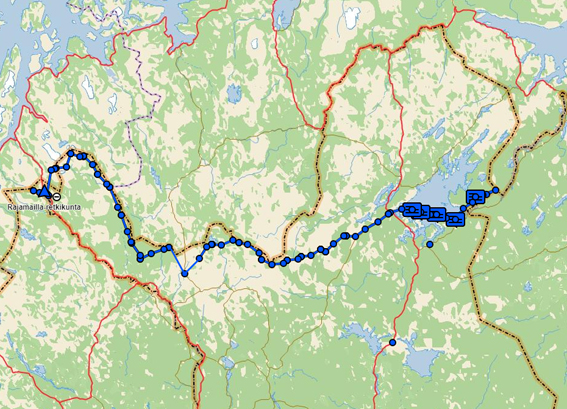 Mr Erno Saukko hiked solo for 81 days in summer 2016 in Finnish and Norwegian Lapland. The approximately circular route started from Inari west to Pöyrisjärvi Wilderness Area, then in Norway to Karasjoki, Tana and Pasvik, and then to Nellim.

Mr Tero Pylkkänen was seriously depressed in 2014. He did not want to try to be cured by taking the pills his doctor prescribed for him. Instead he started a hike. He hiked around all of Finland, 4200 km in 192 days. He felt cured after the hike. After that he has done several other over 1000 km hikes, too.

Sounds like ‘Men Only’ kind of a hobby? Nope.

Mrs Minna Jakosuo got as her 40 years birthday present a permission from her family to go and spend a month hiking solo in Finnish Lapland in summer 2015. She loved her month out there and has been blogging about long hikes since then, and just recently again pondered this subject.

Edit: Blogs are a great way express oneself, and it’s wonderful how many of them there are… But it is also a problem, for there are many super interesting blogs you never happen to find, just because there are so so so many blogs around. One month after I originally posted this blog article I bumped on Ms Sara Kinnunen, who, among her great many hikes during a special year of hers, did a 66 days long solo hike in summer 2018. How did I not find her blog earlier? Well, better late than never.

Sara started from Vuotso town to Urho Kekkonen National Park, and continued across Hammastunturi Wilderness Area to Lemmenjoki NP, and forward across Muotkatunturi, Paistunturit and Kaldoaivi WAs, and ended her hike to Sevettijärvi town.

If you, my dear reader, are Finnish, or can understand Finnish, I recommend you to read those blog entries, or at least leaf through them. They are absolutely great dreams that have come true.

And these are only samples of long hikes in Finland, many more have been done. Like the two ladies who were nearing their 50th birthday. How did they celebrate it? By hiking 50 days in Lapland.

Or what about the Finnish man, who got seriously addicted to hiking through all of Finland. He first walked from south to north, 1570 km in 54 days. A couple of years later he bicycled around Finland, 3700 km in one month. Then next winter he skied from Porvoo in south coast to Nuorgam, the northernmost village in Finland. And no, this was not enough. Two years later he paddled through Finland from north to south. Not along the coast, but via lakes, rivers, streams, and many times by pulling his kayak from one water system to next.

These and over 30 other ultra long hikes I collected to my book Vaeltajan opas (Edita 2008). Borrow it from a library, if longer than usual hikes attract you.

I’ve never counted my day hikes, but there must be thousands of them. I have counted my ‘normal’ backpacking expeditions in Lapland. There are precisely one hundred of them. Most often this kind of a hike is week long, though sometimes only five days and sometimes something like twelve days.

And then I’ve done two longer hikes myself. We already briefly glimpsed on one of them (scroll to the bottom of that post). We skied with my good friend Mr Markus Rask from Nellim to Kilpisjärvi (yes, the same villages you find mentioned several times above), from eastern end to western end of Finnish Lapland between 1st November 1999 and 5th January 2000. 930 km in 65 days, outside ski tracks. There was nothing ultralight in this expedition, equipment at the height of winter is necessarily rather heavy. I will be telling about this long hike more thoroughly in November and December. 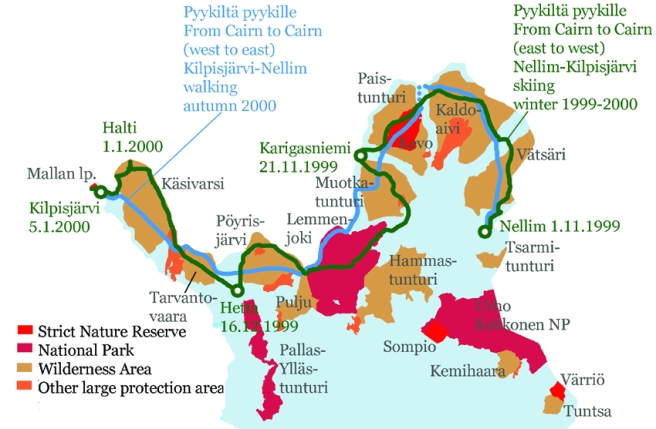 My long hikes, with Markus Rask. Why from Nellim to Kilpisjärvi? There’s no hiking trail there, is there? No, no trail. But the three country cairns (in east FIN-RUS-NOR, in west FIN-SWE-NOR) are interesting start and end points, and between them you can hike almost all the time in real wilderness. You only have to cross a couple of small roads while hiking 600 to 1000 kilometers.

The other long one we did also with Markus. In October 2000 we walked from Kilpisjärvi to Nellim, 600 km in 19 days. This time our approach was ultralight: Our backpacks weighed about 10 kg with five days worth of food at a time and we tried to walk fast. Our average was 35 km per day.

There are lots of numbers with ‘km’ or ‘days’ after them in this post. This does not mean in any way that the longer the trek, the better, or anything like that! This is no competition! The numbers are here just to give you an idea of what kind of a expedition each of these was.