Finland is a country of thousands of lakes. There are in fact about 180 000 lakes in Finland. This makes for great views from lake shores, hilltops, ridges and fells.

Lakes are also great places to enjoy nature in Finland, but there is huge variation according to seasons on what you can do. In summer you can of course canoe, or row a boat, or sail, or swim. Most of the winter you can ski on lakes, sometimes even skate.

This is the normal situation on lakes: paddling in summer, skiing in winter.

However, both in late autumn and late winter there is a period when you cannot go to lakes at all. Let’s see first some pics taken from the same bridge last November: 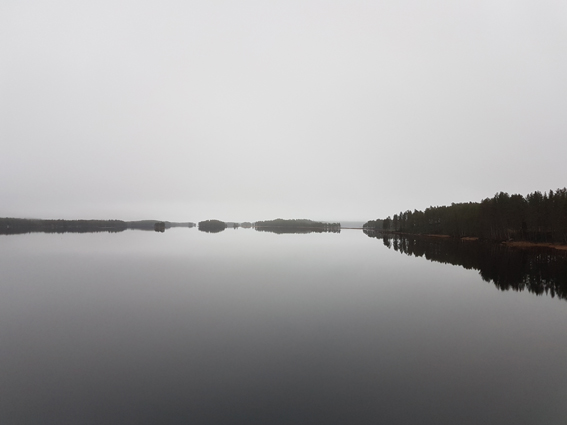 This pic was taken on 7th November 2018. A perfectly still morning would be good for canoeing.

This pic was taken on 22nd November. There is still some open water to be seen, but most of the lake has got a thin ice cover. It’s not possible to move on the lake with a boat or a canoe, but it’s also not possible to walk or ski on the too thin ice.

This pic was taken on 30th November. The lake is completely frozen, but the ice is still thin. I wouldn’t go to the lake yet, but the most eager fishermen might be going already.

In December the ice cover was thick enough to ski, though this depends always on the temperatures and latitude. It’s always been customary to use these even surfaces for skiing, since stone age to today, through the winter, say, from December to April.

This year spring has arrived very early. There isn’t much snow left around here where I live, and the ice from the lakes starts to thaw out. It is again the time of the year when you cannot move on the lakes at all.

Sometimes the ice cover is thick enough for skiing until the beginning of May, but not this year.

This pic was taken on 25th April 2019. There is a patch of open water, but most of the lake is still covered by very fragile spring ice.

A pic to the other side of the same bridge. Two swans were gliding majestically on the open water. Heralds of spring.

Soon the ice thaws completely, and a new season for canoeing starts!

2 thoughts on “Ice on lakes – see the situation right now”