I’m not a veteran on using smartphone map applications. There are certainly many great apps I have never even heard of. However, I want to introduce two good map applications and a way to obtain free offline topographic maps for it. This advice is for Finland, and for Android.

The easiest way to use smartphone for navigating is to use online maps. Maps used in web browser, such as www.excursionmap.fi or www.mapsite.fi are great. Both of these free services you can use both in Finnish and in English, and they give you great topographic maps, and they show your own location. 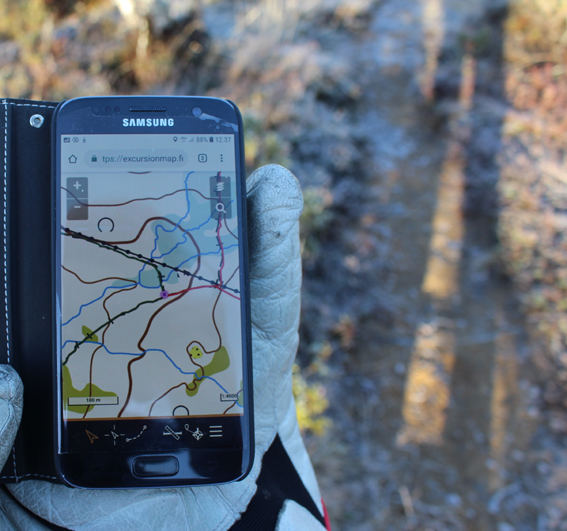 Excursionmap.fi shows your exact position as long as you allow it to use your smartphone GPS. And your mobile phone has to have coverage. Same applies to MapSite.fi.

You cannot download a GPX track and see it on these web browser maps, however.

There are many map applications for smartphones that allow GPX tracks, waypoints and many other features. When I bought a smartphone, one of the very first things I did was to install Locus Map from Google Play. There is a free version with ads, and a non-ads version that costed about 7 euros in 2018.

(Sorry, I don’t know how to make links to Application Store. With your smartphone go to Google Play and search with the names mentioned in this post if you are interested.)

As default you can find a rough topographic map of Finland in Locus, but you don’t have to rely only on that. I recommend rather use the MapSite map material. In Locus Map you do it like this:
-touch three lines in upper left corner
-select Maps
-select Online, and from there find Kapsi.fi/Finland and Peruskartta 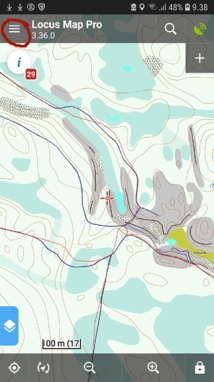 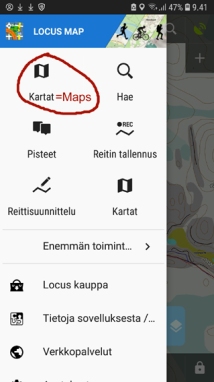 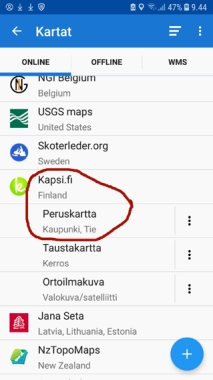 Mostly you will be hiking in areas where there is roaming, and then this method works fine. However, if you head out to really remote corners of Finland, you need an offline map.

National Land Survey of Finland (the institution behind MapSite.fi) opened its map data in 2012. That was a huge leap: from there on it has been free for anyone to use their accurate topographic maps in magazine articles, blogs, books, smartphone applications and so on.

Mr Teemu Peltonen edited this open data in such a format you can download topographic maps of all Finland to Garmin GPS devices and Android smartphones. Teemu Peltonen’s site is at kartat.hylly.org.

That page is only in Finnish, but with these tips it should be possible to download the map data also for someone who does not understand Finnish. For Android Teemu Peltonen has converted the map data to formats for two well-known international map apps, Locus Map and Oruxmaps.

This is what I did: I had first installed Locus Map. Then I went to kartat.hylly.org with my smartphone browser and scrolled down until I saw “mtk_suomi.map” I didn’t click that, but “Asenna kartta Locukseen” (=’Install map to Locus’) next to it.

This is a huge file, over 3 gigabytes. Make sure you have wifi and are not dependent on cellular phone net connection while you download it. And you need that much free space in your phone.

After the download is finished return to kartat.hylly.org and click “Asenna tyylimäärittelyt Locukseen” (=’Install style specifications for Locus’) beside text peruskartta_v3.zip. 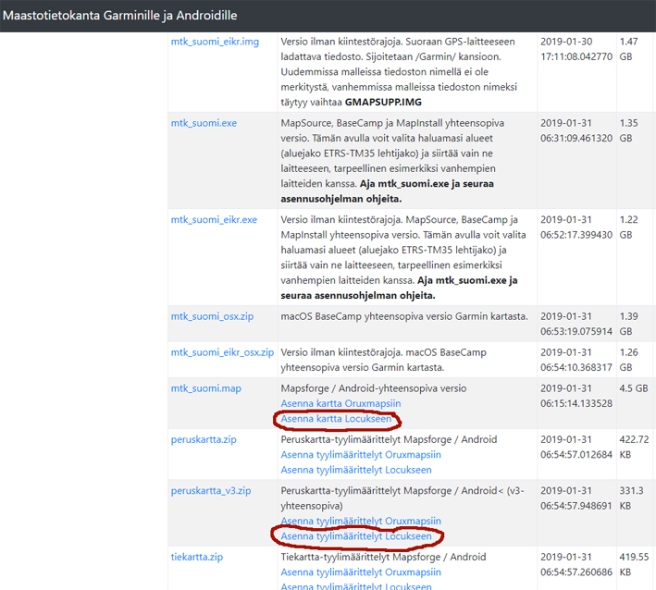 When you have successfully downloaded MTK Suomi map and style specifications, open Locus Map. Press three lines in upper left corner. You find Maps. Choose Offline, and Mtk Suomi should be in the list, probably under MAPSVECTOR. Choose it. 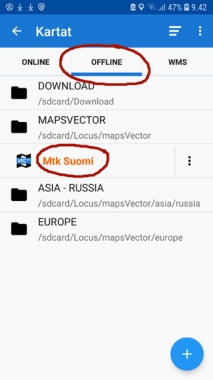 Return to Locus front page and click the blue box in lower left corner. Choose Map theme and from there choose Peruskartta. 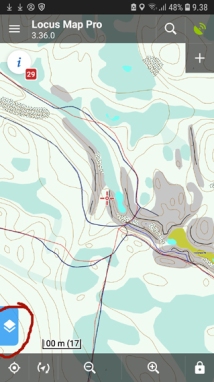 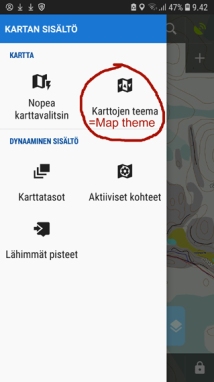 If all went as it should, you now have an offline topographic map of all Finland that works even when there is no mobile coverage whatsoever.

Another much used map app is Oruxmaps. You find Oruxmaps Donate from Google Play, it costs about three euros. However, at www.oruxmaps.com you can download the free version (.apk file) and transfer it to your mobile phone. This is handy if you want to check first if you can make the app to work and do you like it. If you do like, why not donate the small sum for the developer?

There is a file at kartat.hylly.org for Oruxmaps the same way as for Locus, but for some reason I could not make that work. However, I did this:

I downloaded “mtk_suomi.img” with my smartphone. Then I moved it to folder /oruxmaps/mapfiles. Then I started Oruxmaps and chose the map symbol from upper right corner -> Change map -> Offline -> mtk_suomi (IMG). And now I have the offline map for all of Finland also in Oruxmaps.

When you are on a multi-day backpacking tour in remote wilderness it’s important to save your cellphone battery (and carry a power bank). Make sure you understand the energy saving options of your own phone and use them.

You can even switch your phone to fly mode, so that it doesn’t try to find mobile coverage in vain when you are out of roaming zone. That saves power as well. You can use Locus Map or Oruxmap with offline map also in fly mode.

GPX tracks and recording your own route

My guidebook Hiking in Finland – Day Trips and Backpacking Expeditions will be published in June 2019. One section of the book introduces the very best hiking destinations and trails in Finland. Naturally I describe the destinations by words and photos, but in addition to that I have also created a GPX track of each trail mentioned.

There will be a QR code in the book that takes you to a web page containing the GPX track files. These tracks can be used in many ways, and one interesting way is to download them to your smartphone, and use them with Locus Map, Oruxmaps or similar.

I’ll write another post concentrating on GPX tracks in the near future. 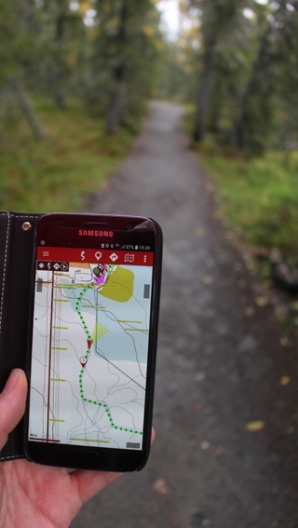 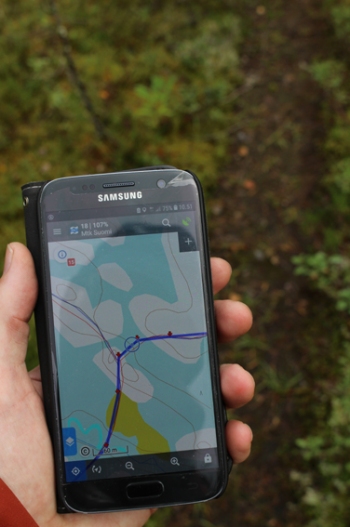 Following a downloaded GPX track with a map application and offline topo map in Pallas-Yllästunturi National Park. Oruxmaps on left, Locus Map on right. Both are very good map applications.

These map apps have many handy features. One of them is recording your own track. This uses cellphone battery, so you probably won’t want to use it on multi-day treks, but on day hikes recording your route is great. 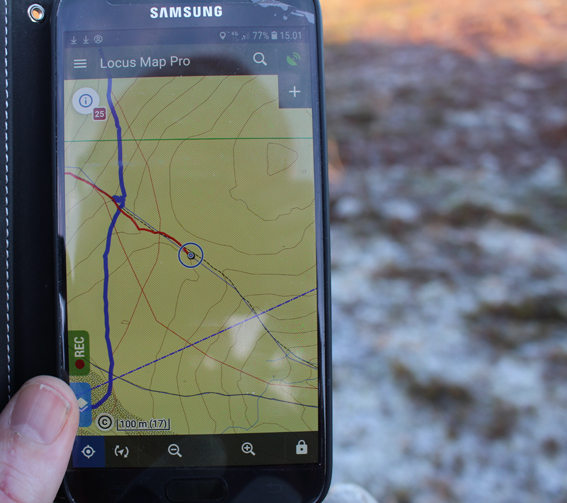 Background, and other apps

After all this talk about modern aids for navigating I have to say I am an old school hiker: I like to navigate with paper map and compass.  I think that’s both fun and also a very reliable way of navigating. Compass + paper map cannot run out of battery, they work even in –40ºC and they rarely get broken.

Using paper map and compass is my main method for orienteering. But I have learned to respect the map apps, they do a very good job!

My smartphone is Android, so these tips and ponderings refer mostly to Android/Google Play. However, I’m sure there are very good map apps for other systems, too, and often under the same names.

There are a multitude of map applications for smartphones. I have owned a smartphone only since last summer and I am certain I know only a fraction of what is available. What’s your favourite map app?

I’ll mention a few other map apps. For Finland you can find from Google Play for example Karttaselain and Maastokartat. The online versions are free, and if you pay some money, you get the full version, which enables offline maps as well. These apps are also handy, but as they are only in Finnish (as far as I know) I won’t go deeper to them.

And there are Google Maps, Here, Yandex and whatever international car navigation apps. These are super handy for a car driver, but not much of use for a hiker. They map the roads and tell distances and best routes, and in cities you can find information on services and so on. However, in terrain the information is not nearly precise. There are no contour lines, most of the paths are not shown, bogs are not on the map etc.

Now you may be asking, what’s wrong with good old GPS receiver? Nothing, absolutely nothing. A GPS receiver with map is a great tool, with buttons that are easier to handle in cold conditions than a touchscreen. And it is probably more water and hit resistant also. However, if you are carrying a smartphone with you in any case, and a paper map and compass, then a GPS receiver starts to look a bit useless.

Next week I’m going to write about my choice of winter handwear.

In case you are wondering if I am getting money from the above mentioned applications, rest assured: I am not. I’m not earning anything with this blog, and not trying to. 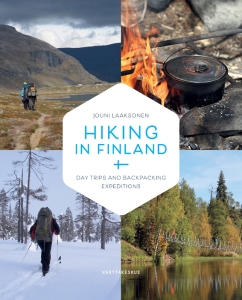